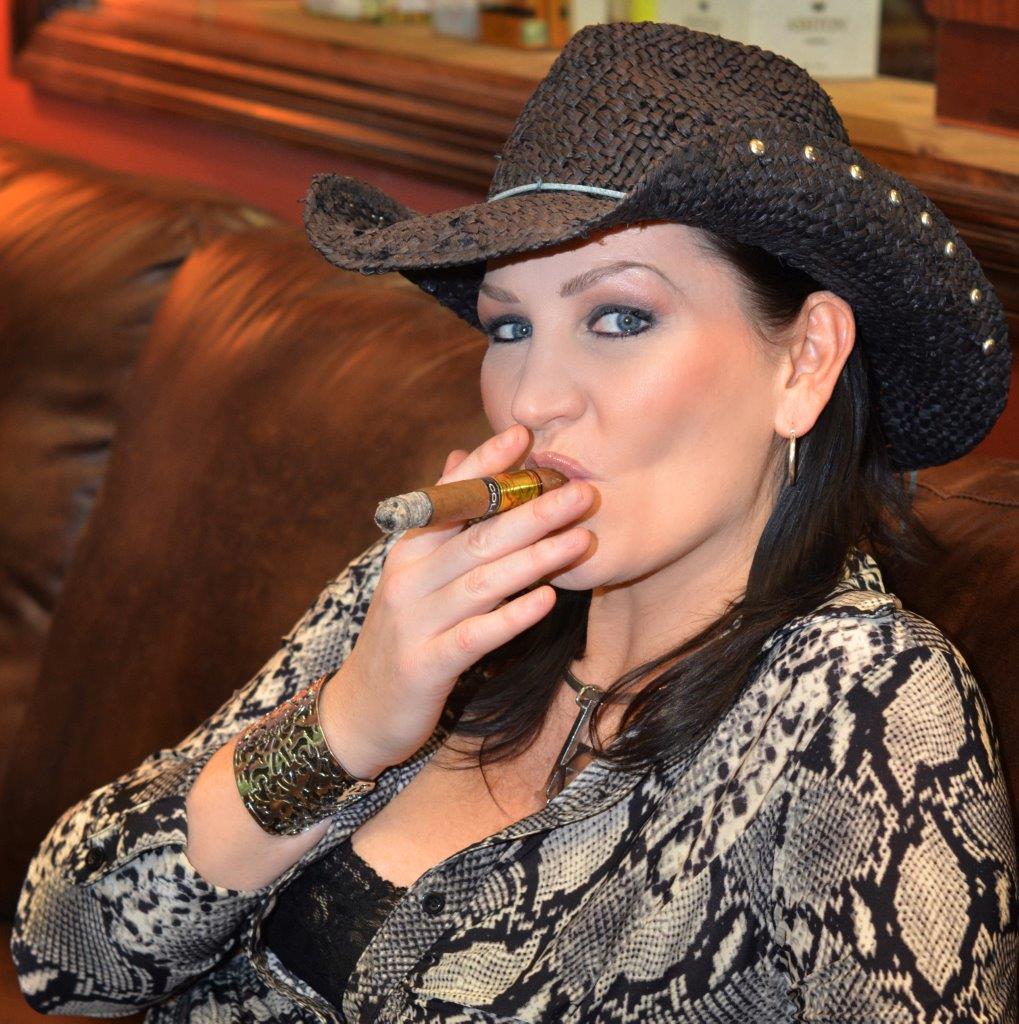 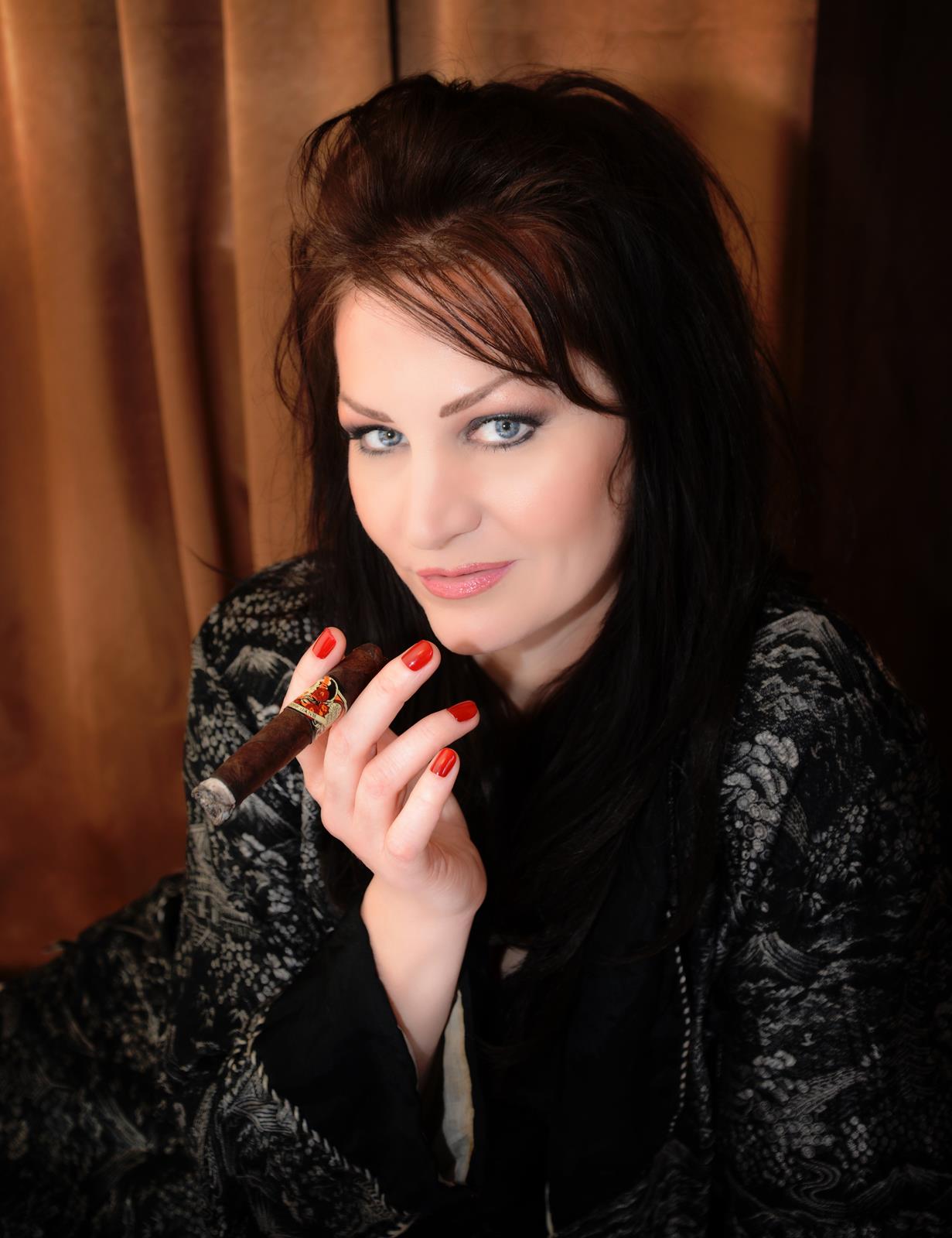 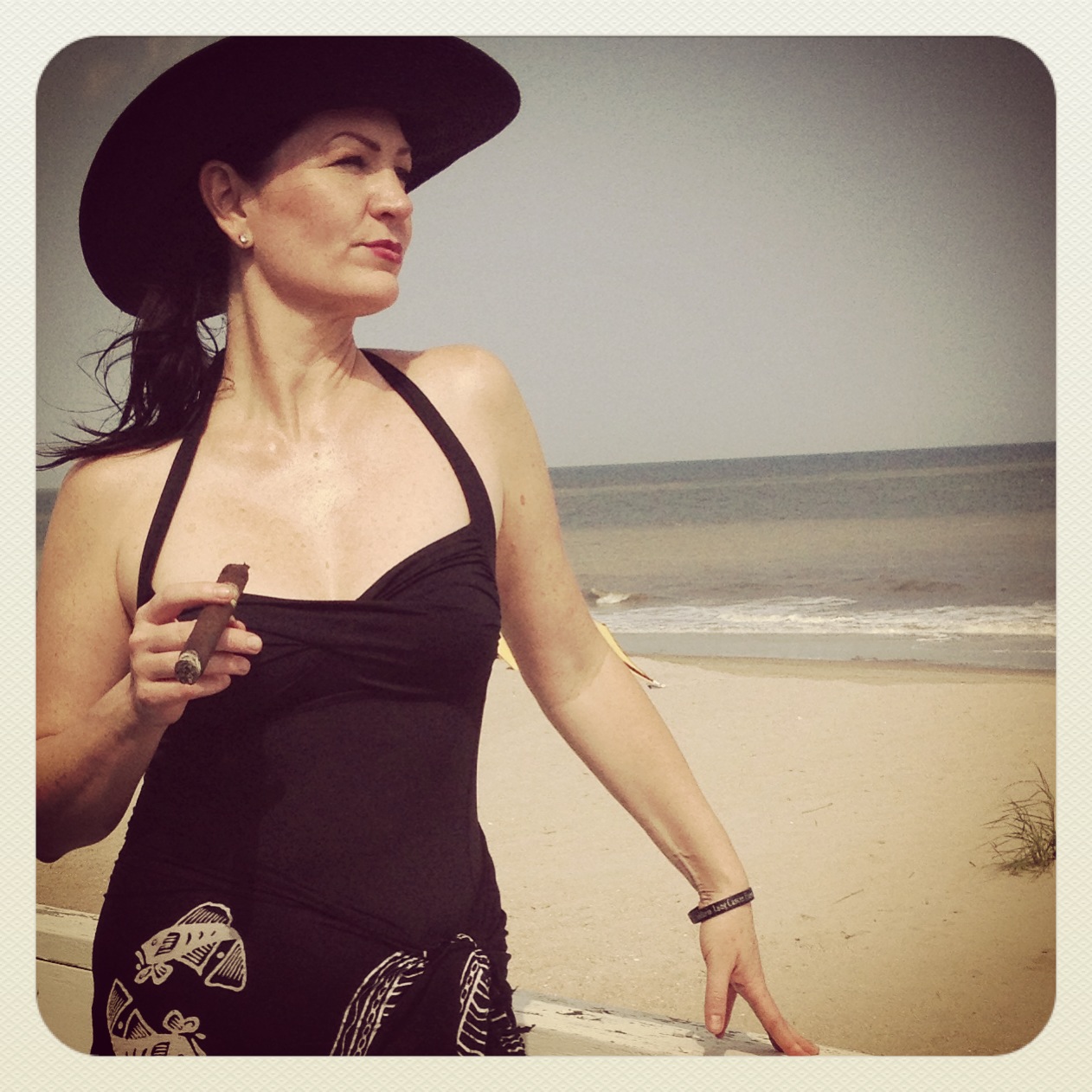 Kimberly Reeger is  an Artist of mixed media, cyclist and a licensed esthetican at a spa in Florida. A  year and a half ago she started up an on line Facebook Group called LOLAS: Ladies Of the Leaf Aficionadas’ Society. (copyrighted). She started the group in hopes that she would get in touch with four or five ladies in her area to start friendships , share stories and photos as well as to met up somewhere to smoke together. For, she thought she was the only lady in town who smoked cigar, she never saw any others. Well, not only did she finds a few ladies in the group, It  grew to more than 1,200 members containing women and the men that support our desire to smoke cigars. And during the year a cigar shop opened up in town, where they met once a month.

1)when did you start to smoke cigar?

My first actual experience with a cigar was approx 15 years ago at my firend’s wedding. At the receiption a group of men including my dad went outside to chat, joke around and to light up a celebratory cigar. There must have men eight guys to that one cigar. Not sure the brand, and not sure if they even new each end to light but someone had a pocket knife and they managed to get it up and going. I was inside listening to the ladies talk about family matters and stories about the summer etc…and while they did,  I kept staring outside watching the guys laughing and carrying on, which looked like they were having more fun. So, I joined them.

Not to be left out and to prove I could be ‘one of the boys’ I asked for a puff on the cigar. They were shocked…and that was a thrill for me.

I did quite well for my first drag, no coughing and rather liked it. The guys were impressed and all agreed that I past the test to hang out with them.

2)why did you start to smoke cigar?

I believe it may have been about 6 months after my first puff on a cigar  that I actually bought my first one…it was I believe a Macanudo Portafino because it came in an elegant protective tube. The cigar was one of four being sold at a nightclub I went to while on vacation by myself.

I remembered the remarks that I received from my first puff  which inspired me to try one on my own and to relive that excitement of shock value.

The guys thought it was really cool and distinguished that a woman would smoke a cigar, and it made me stand out from the crowd….and well…I decided to ‘stand out’ again at the club.

I really enjoyed everything about my first cigar,

I felt like a Rebel of Women, I stood out from the crowd, and I received  those shocked looks from both men and woman. But the most important reason why I enjoyed it at that time was that it gave me a sense of power and strength, and a security blanket of sorts….  it was my shield and sword rolled into a cigar.

It was also a wall I can put up to intimidate some men and ladies. That helped  because I was by myself in a crowed room and needed not to be overwhelmed by the mass. It was in a sense, a way to deep breath, in a meditative way to help calm the nerves of being in a foreign place amongst strangers.

The cigar , at the same time  was an invitation for the select few to approach me that wanted to converse about a common passion of cigars.

Now,  there is a commonality that can bring a couple people together for conversation. And the men that would come up to talk to me were cigar aficionados , they were the gentlemen amongst the sea of guys.

I enjoyed the respect the men gave me as we now bridged the gap of the two worlds of opposite sexes. There was now a common bond that also got me accepted into their world.

And because of all these reasons for me smoking a cigar, I then looked forward to another one when being on adventures out of town.

3)how many cigars do you smoke during the day?

After a few years of enjoying cigars a couple times a month as I go ‘out on the town’, I started to enjoy cigars for other reasons and started buying more frequently. For I then begun to explore the cigar world itself.

I decided to start buying different kinds and seeing what other cigars where out there besides the three brands I was always reaching for.

I wanted to refind my palette. I was for years like the people who always ordered the ‘house wine’ at restaurants, not ever branching out because they did not know what to ‘look for’ in wines nor thought they would be able to taste the diffferences. But really, you can trust your palatte to let you know of the biggier key notes. Not only was my palate begining to blossom, but my passion of cigar smoking started to awaken.

I would buy cigars and sit on the front porch focusing on the cigar itself rather than the world around me like I was used to.

The cigar was no longer my pasicfier, security blanket, my sheild and sword…it had a new title. It was my co pilot , my friend who would spend time with me while we learned about each other. It was my quiet friend who would tell me its stories as I smoked it…what kind places it visited, the people who touched it, the hardwork that went into making it.

The flavors and notes were it’s secrets that were being revealed to me as I would smoke through the layers and inches of the cigar. It spoke and shared it’s own passion with me.

The cigars were more than an act of ‘using’  it like a tool, they have become my partner of passion. And because of that I had more respect for them and then I  incorporated them into my life on a more regular basis. As of this year after starting up a Ladies’ cigar group online, cigars  have became almost a daily occurance, a lifestyle that I now share with others. My ‘Romancing of the stick’ is now shared with others to experience , to learn from and to inspire others to join the act of passion for themselves.

4)which is the best place you have smoked a cigar?

I really don’t have a favorite place to smoke cigars, for I don’t want to limit the great experience to ‘one’ but rather  to many places.

If I enjoy a cigar anywhere and everywhere, whether by myself or with others then more days of my life are filled with happiness.

5)what do you use to cut the cigar?

When I cut or light my cigar I don’t really have a specific cutter or lighter. I have all types of cutters and it depends on what is handy that I use. But, I will go out of  my way to look for my V cutter if I know the cigar will benefit most from it. I think my least favorite cutter is the guillotine style for I don’t have much patience to pay attention to what I am doing…. and can be quite dangerous to the cigar or worse, to me.

6)when do you light your first cigar of the day?

Because I work at a day spa as a skincare specialists,  I never smoke before work. This way my clients never experience any side effects of a cigar, meaning the smell of stale smoke on my hands when I am performing facials. My career is a hands on approach to healing and treating.

I will however smoke my cigar(s) after work  and sometimes paring them with wine or another spirit of choice. On the weekends I will light one up in the morning or afternoon when I want to take time for the passion.

I usually will reach for a Connecticut wrapped cigar in the day time while reaching for the maduros in the evenings after a meal. I like the sweeter tastes of those wrappers. But I have never picked a favorite cigar nor brand. Again, I don’t want to limit myself to one favorite but rather a dozen. One ‘favorite’ I have picked is the type of region of tobacco, for I prefer to lean heavier on the side of Nicaraguan tobacco.

7)how do you feel while you are smoking and what is the cigar for you?

When I light up the cigar of choice I feel alive,  in tuned, and  balanced.

I feel like I am on an adventure of the senses , a zen like way to get in touch with nature and the world while at the same time escaping from it all.

Cigars have become my trademark amongst my friends and family, for begin a cigar aficionada is who I have become….the ‘verb’ has been replace as a ‘noun’. I started out as a lady who would smoke a cigar. Now, I am a lady of the leaf aficionado.